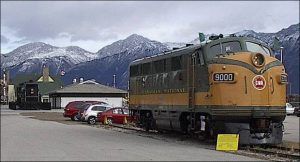 On October 27, 2001, locomotive 9000 and a contingent of APRA members were in Jasper to celebrate the transfer of the Jasper Station’s ownership from Canadian National to Parks Canada. What follows is part of a report on the event by Ted Van Gunst, Vice-President Motive Power:

Our trip to the park started from the Alberta Railway Museum yard on Oct 23, 2001 at 15:30. We were picked up by Lakeland & Waterways Railway train # 578 behind their power and proceeded to Walker Yard at a break neck speed of 25 mph.

As we began the movement from the museum yard Engine 9000 was idling. We were unable to operate the unit under her own power because of a faulty adjustment of the control air valve. Once we solved the problem we were able to move her under her own power.

We arrived on Walker Yard shop track at 20:30, at which time I left the unit in the care of CN shop staff. They fueled her and inspected her for roadworthiness and tripped her though the trip center. She came out of there with a great report. They were somewhat in awe of such an ancient diesel locomotive still in good condition – perhaps better than some of their own engines!

The next day, Ted headed over to Walker Yard Diesel shop, from whence the train was to depart.

We finally departed the yard at 19:15 on a westbound way freight. We had to switch at two different places as well as meet and wait for opposing trains.

We finally arrived in Edson at 01:00, and after some more switching we left Edson at 02:30 on the last leg of the journey to Jasper.

By the time we arrived in Jasper it was 06:30. At that time I left the unit on her own and went for some much needed rest.

At this time I must give great praise to Mr. Jim Brock, who shadowed us all night on the highway in his car. Wherever we stopped, he was there keeping me supplied with fresh radio and telephone batteries.

Later in the day, Ted reports, 9000 was moved to the house track west of the station, right next to Main Street and just in front of xCN 6015. At that point Ted and Jim Brock were met and welcomed by officials from Parks Canada. They attended the gala evening on Saturday evening courtesy Sharon Woods, Project Manager for Parks Canada.

… Jim and I had a wonderful time showing off our fine piece of equipment, which we were very proud to do. Many people complimented us on the fine job we are doing in preserving a piece of railway history.

Once Monday morning rolled around we were assembled into a train with 6060 and her equipment at 08:30 and departed Jasper Yard for Walker Yard.

The trip lasted until 19:30. We got to work 9000 every now and then. The locomotive arrived back on our museum property Tuesday evening, October 30, 2001.

Thanks to Ted for this first-hand account, and additional thanks to everyone who worked hard to make the event the great success it was. A special thanks to Canadian National, Parks Canada and the town of Jasper.