A flanger is used to plow small amounts of snow off the tracks, or is pulled behind a ballast car and used to spread the ballast. The operator rode in the cupola to operate the flanger. There is only one control on the flanger, a lever to raise or lower the blade, assisted by air pressure supplied by the locomotive. Half of the flanger serves as living quarters for the operator. Below is a closeup of the flanger’s blade.

Signs having two white dots on a black background or vice versa are placed along the right of way to tell a flanger or snowplow operator to raise the blades because of a crossing obstruction on the track. More than one of these signs on the same post indicates more than one obstruction. 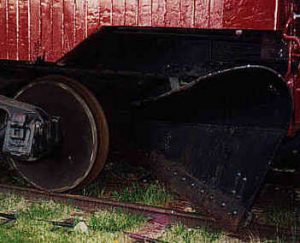