Info on two upcoming activities — our Military weekend July 15,16; and our Northern Alberta Railways day on August 7. Look forward to seeing you at the Museum.​

Railway have long played a key logistics role in the movement of military personnel and equipment. To commemorate those ties, the Alberta Railway Museum will host one of the largest collections of Military and Civil Defence Items Edmonton has ever seen on July 15.

An Alberta affiliate of the Military Vehicle Preservation Association (MVPA) will display Jeeps and other equipment spanning six decades. In addition, the Canadian Civil Defence Museum Association (CCDMA) will feature a rare auditory reminder of the not-to-distant Cold War past — three tests of a rare Canadian-made CLM Air Raid Siren.

“This is an opportunity for the public to experience and photograph the trains that helped settle the West, alongside the military equipment that helped preserve our freedoms,” said Alberta Railway Museum president Stephen Yakimets.

“It’s especially fitting, not only as part of Canada’s 150th birthday celebrations, but because July is also the 100th anniversary of a key battle in our country’s history: The Third Battles of Ypres, or Passchendaele.”

The Alberta Railway Museum, located at 24215 34 Street in Edmonton, recreates a small railway terminal with a country station, shops and small rail yard. The equipment collection includes the last surviving steam locomotive of the Northern Alberta Railways (No. 73) and Canadian National’s first road freight diesel-electric (No. 9000).
The military vehicles to be displayed, weather permitting, are privately owned and restored by collectors, and were originally used by Canadian Military, Civil Defence and the Emergency Management organizations. They include:

Dave Dickie of the Canadian Civil Defence Museum Association said his group is excited to show off Cold War treasures: “Some of these were only recently discovered, most from locations so secret Canadians are only becoming aware of them 60 years after their creation!” he said.

Dickie noted the railway museum’s location, on a former spur line that once linked to the Namao armed forces base, is another connection to the military past.

“The isolated location of this section of railroad made it perfect for feeding nuclear weapons to the Strategic Air Command base nearby,” he said.

History buffs can also review maps of rail rights-of-way, long erased from the City of Edmonton, that were known as the “Cold War Railway.” The lines ran west along 106 Ave, to various locations along its way, providing people and material for Cold War preparations.

Dickie said his group will demonstrate how the railway was part of the Nuclear Detonation and Fall-Out Reporting System, providing locations for staff and radiation detection equipment in fall-out shelters throughout the rail system. 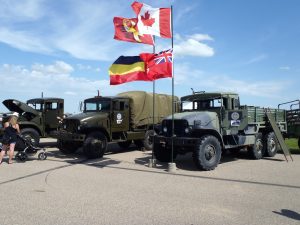 The Alberta Railway Museum is open 10-5 on weekends.