NAR 73 is now officially owned by the APRA!

A little bit of history on Northern Alberta Railways #73: As many of you know, it is the only surviving Northern Alberta Railways steam locomotive. It was built in 1927 by the Canadian Locomotive Co. in Kingston, ON, for the Edmonton, Dunvegan, and British Columbia Railway, a precursor to the NAR. In April of 1964, it was donated to the Canadian Railroad Historical Association, Rocky Mountain branch by Stelco Edmonton (now AltaSteel).

On December 21, 1967 the Alberta Pioneer Railway Association was chartered under the Alberta Societies Act. For a time, the CRHA Rocky Mountain Branch and the APRA ran in conjunction with each other and shared membership, but the ownership of 73 was never transferred over. She last operated under steam August 6, 1979, and the Marker, the APRA newsletter, reported on September 1, 1979 that a major leak in her flues had put #73 out of service.

For the last several years, the APRA board has been working with the CRHA to transfer ownership of 73 to the APRA so that restoration can be done on this truly significant Alberta artifact.

​I am pleased to announce that the final agreement was received today, signed by Nadine Clouthier, Executive Director of ExpoRail (a CRHA project), and was signed and accepted by me, Stephen Yakimets, President of the Alberta Pioneer Railway Association. 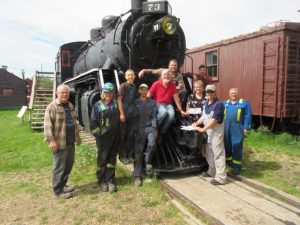 A handover ceremony and event is being planned for NAR day, Monday, August 7 on the Heritage long weekend. Watch your email, the website and Facebook for more details.

Note: Several donations for the restoration have already been received. If anybody wishes to donate they may do so via the Paypal button on our website, cheque by post, or in person at the gift shop.