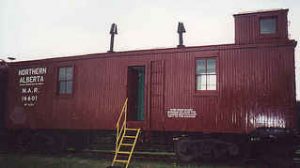 The flanger was repaired in 1995 and repainted inside and out in 1996. It was renumbered back to NAR 16601. The interior of the flanger is currently being repainted. This car was built for the Canadian Northern Railway. In the 1930s, it was then converted to a NAR work service train where it was used as a road car and field office for the civil engineer responsible for the right-of-way.

A complete restoration has been carried out on 17900. The exterior has been repaired and many boards replaced. Windows and doors were rebuilt and the floor was repaired and re-tiled. The rest of the interior was restored, including shelves, doors, cupboards and moldings. The car was completely repainted inside and out. It has been fitted out as a display car, showing the implements and tools used by the track engineer. 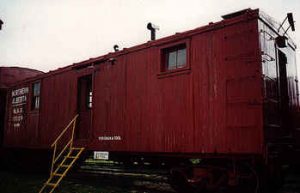 This foreman and tool car was used as the office and sleeping quarters for the work foreman. It contained all the documents necessary to authorize repairs to the track, the time sheets for the crew, and the tools to carry out the job. This is also where the pay packets were handed out.

The car has been painted inside and out as part of its restoration to last used condition. 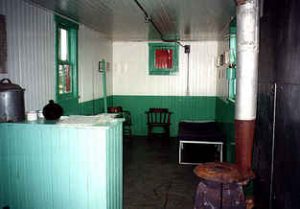 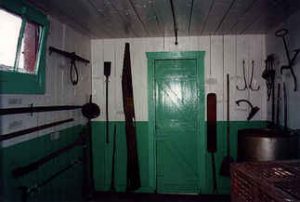 This car was built for the Canadian Pacific Railway as an outside sheathed box car 197282. In 1941, the car was converted for work service by the NAR and refitted as a mobile pantry and living quarters for a cook.

At one end of the car, there is a bed, locker, stove and sink for accommodations. The other half of the car served as storage space for the food supplies needed for the cook car which is coupled to it. The shelves are slanted so that cans which are stacked on them do not fall over when the train moves. There is also a refrigerator for the storage of perishables and a meat cutting table across from it.

The cook supply car was completely painted inside and out in 1995-96 and currently contains many interpretive artifacts. 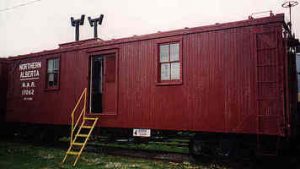 This car was was built for as Canadian Pacific Railway as box car 214022. It was bought by the NAR in the 1930s and used as a box car until 1944. The car was then converted to a cook car (kitchen). The freight doors were replaced and new flooring was put in. Windows, lower open shelving (for pots and pans) and upper securely latched cupboards (for dishes) were also installed. There is also a metal triangle just outside one side-door that was used to call work crews for meal time. 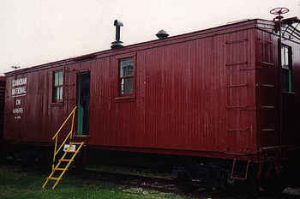 The car served as a concession car for a number of years before it was restored back to its bunk car configuration. Box Car 69695 is currently in the Dunvegan Shop being restored. 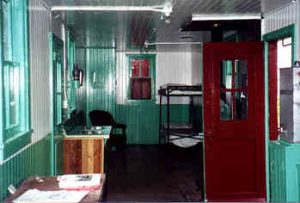 This car was built for Henry Ford’s Detroit, Toledo and Ironton Railroad as a 10-compartment companion car #50 for Henry Ford’s business car “FAIRLANE”. In 1943, NAR bought the car in to serve as the Day Coach. It was numbered 1953. This day coach had reclining seats for 66 passengers. It was converted for work service in 1967. In its current incarnation as a bunk car, it has a toilet, wash room, shower room, recreation room and bunk area. The bunk area has a bed, two drawers, window, upper shelves, and locker for each man. The car also contains a Henry Ford interpretative display. 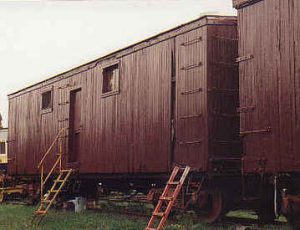 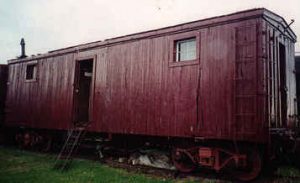 This car was built for the Canadian Pacific Railway as box car 56936 and then renumbered to CP 409748. Its main features include wood stringers under the car body, four truss rods, K triple air brake, arch bar trucks, coil springs and 4.25 x 8 journals with plain bearings. The car also exhibits three outstanding inventions: the automatic coupler, the arch bar truck and the automatic air brake. At the time it was built, it represented the highest standards of freight car construction and technology. It is currently being used for storage.

This ballast car was built by Hart-Otis Car Company. It has steel-reinforced wooden sides and outside deep steel sills to allow either side or centre dumping. The dumping mechanism is manually operated. This is the only car in the collection with Dolman Patent trucks that have 5 coil springs in each side frame and 5.5 x 10 journals. It is currently being used for storage. This ballast car was used by the Edmonton, Dunvegan  and British Columbia Railway (ED & BC), the Alberta and Great Waterways Railway and then NAR. The primary use of a ballast car is for hauling and dumping material (i.e. rip rap rock, sand, gravel) for bank widening and grade stabilization. Material would be dumped in one location, then distributed via Jordan spreader, bulldozers or horse drawn scrapers.This car used compressed air from the locomotive to dump the gravel – an improvement from Ballast Car 14040. 14085 is equipped with two different trucks: a Dolman (patented 1929) and a Vulcan (patented 1911), with pole pockets cast into the ends of the truck sides. This ballast car is currently being used for storage. A constant companion to 63017 is its idler car, 57611. It was originally built as a flat car and then later converted for use as an idler. The car serves two purposes. First, it provides space in a train for the crane arm to “sit”. Without it, and with the crane arm being in the front position, the front coupler on the crane would be inaccessible. Second, it carries spare equipment, supplies and tools required for the crane during operation. This idler, however, serves a third purpose: sleeping accommodations. Since the crane is fired and operated like a locomotive, there are sleeping bunks for a crane engineer, an operator and a fireman.

Idler 57611 is currently in the Dunvegan Shop being restored. 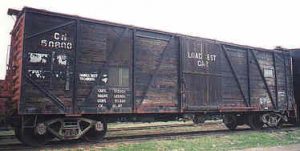 This car was built by the National Steel Car as a box car. It was then converted by the CNR to a load test car and numbered 50800. This car was used to test the load capacity of locomotives after mechanical repairs and prior to being released into service. To do this, it has a set of heavy duty electrical resistors in it that are connected across the electrical output of a locomotive under test. The resistors put an artificial load on the locomotive so that it can be tested while towing the car. It spent the last years of its service in Walker Yard in Edmonton.