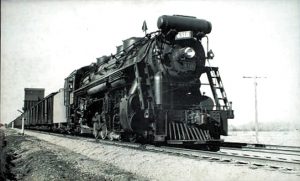 A while back we discovered a photo of locomotive 4318. (The original picture showed a framed print resting on the bumper of someone’s car; in the interest of anonymity and neatness we’ve since cropped out the car.) In our efforts to identify where the photo in this framed print was shot, we received some valuable information via e-mail we thought worth passing on.

This from Ray Matthews, railway historian:

This next from Kenneth Skolyan, railway enthusiast:

The CNR’s T-2-a class 2-10-2s are unique engines. An article was written over 20 years ago in a magazine called CANADIAN RAIL, published by the Canadian Railroad Historical Association (CRHA). The T-2-as spent the vast majority of their lives in transfer and helper service in the Toronto area. They worked from Mimico to Scarborough. The late Dick George once told me they always faced east, thus the fireman’s side was always facing north, leading to a lack of pictures of that side of the engine. They were in this captive service from 1924 to 1955 when 4 were removed from service. The 4100 was renumbered 4190 and assigned to Montreal in snow melting service. I saw her in Stratford shops in July ’58 being rebuilt. She is now in the CRHA’s collection near Montreal. The CANADIAN RAIL article indicated they occasionally filled in for 2-8-2s on the Niagara Peninsula way freights. This statement always bothered me, as the CNR certainly didn’t lack 2-8-2s for replacement engines. One thing is for sure, when they ran to Stratford for shopping they must have faced west.

We thought we’d heard the last on this picture, until Jeff Henricks of Grande Prairie, Alberta, pointed out that the “shadows on the north side should indicate travel to the east, not west”. Thanks, Jeff. Eastbound she is.