St. Albert Station
The St. Albert Station was built in 1909 at Mile 5 of the Sangudo Subdivision. The original station was somewhat smaller. In 1921 freight storage was added on. The station was stuccoed and insulated in 1937, electrified in 1953 and then moved to the museum grounds in 1973. It was placed on its foundation in 1982. Interior renovations were carried out from 1983 to 1986.

Admission, train ride and speeder car tickets are purchased in the station. The train rides and speeder car rides are accessed from the platform. The station also contains a gift shop, a railway library and many exhibits including a complete telegraph office set up.

A replica of this station has been constructed at the grain elevator site in St. Albert. 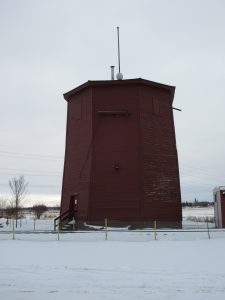 Gibbons Water Tank
The 1919 water tank was acquired by the museum in 1984. It was quite the accomplishment getting it trucked to the grounds due to its size, design and physical condition. The water tank has eight sides each 13 ft. Wide at the bottom, 11 ft. wide at the top and 32 ft. high, plus its roof.

The tank was actually made up of two separate structures – the exterior shell and the interior tank and support members. The exterior served to protect the tank from the elements. The tank, which was constructed like a wooden barrel, with wooden staves bound together with iron straps, was used to fill the tenders of steam locomotives with water.

The ball on the rod at the top of the tank is the float which showed how much water was in the tank. The building has a stove inside which kept the water from freezing during the winter.

The exterior was repaired and repainted in 1994-95. 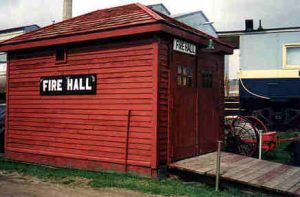 Fire Hall
Built during the First World War, this former CN fire hall is representative of the smaller structures that housed manual fire-fighting equipment of that era.

This particular hall was a feature of the South Yard in Edmonton. The fire hall has been restored and repainted and is now being used as a kitchen type facility for group functions. 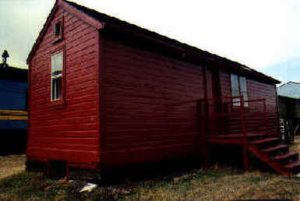 Volunteer Centre
This volunteer centre came from Rosalind, Alberta in 1993 in the form of a bunkhouse. Bunkhouses were set up so that maintenance-of-way crews would have a place to eat and sleep while away from home. The bunkhouse was completely painted inside and out, and has been fitted out as the now current volunteer centre. 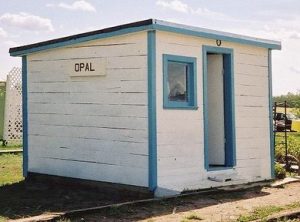 Opal Station
Yes, this is a railway station – technically, a passenger shelter. It stood in the hamlet of Opal, Alberta, a flag stop on the line west of Redwater, AB.

Trains only stopped at flag stops when they were flagged down. It was donated by Robert Murland, an Opal resident. 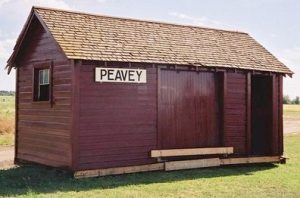 Peavey Station
The station and siding were located in Peavey, Alberta, just north of Morinville AB. It was also the site of a National Grain Company grain elevator. The name Peavey was probably taken from the first two initials of the owner of the elevator company, P.V. Heffelfinger. He and his brothers were part owners of the National Grain Company.

The company was sold to Cargill, Inc. around 1965.The building was donated by the McKirdy family.

Dunvegan Shop
The east shop is named “Dunvegan Shop” in honor of the Northern Alberta Railways. It contains a carpenter shop, car repair facilities, and tracks for storage of railway cars while repairs are being made.

The Calder Shop was built in the early 1980s for storage and repair of CN 6060 when it was donated by CN to the Province of Alberta in recognition of Alberta’s 75th Anniversary. 6060 is now located at Stettler and operates on Alberta Prairie Steam Tours. The shop is currently being used for maintenance and repair.