​Located in Edmonton, Alberta, Canada, the Alberta Railway Museum (ARM) is a rustic outdoor display of railway equipment and buildings. The museum replicates a small terminal with station, water tank and shops. The main emphasis is on cars and locomotives from the Canadian National Railways (CNR), Northern Alberta Railways (NAR) and industrial and short line railways.

Using the grounds map, take yourself on a self‐guided tour. Allow at least 90 minutes to go back in time – train travel time that is.

The Alberta Pioneer Railway Association (APRA) is a registered Canadian charity as a non-profit organization of volunteers whose interest is in the collection, preservation, restoration, and interpretation of artifacts related to the technology and history of railways in Western Canada. APRA began as a small group of volunteers in 1968 who operated and maintained the Association’s equipment out of the Edmonton Transit System (ETS) Cromdale car barns located at 116th Avenue and 80th Street in Edmonton. In 1976, APRA relocated its equipment to the current museum location, the former Canadian Northern Railway (CNR) Coronado subdivision and created the Alberta Railway Museum. Since the opening of the Museum in 1977, volunteers have maintained and operated the facility with assistance from funding raised trough memberships, admissions, grants, and casinos, along with donations of parts, supplies, equipment or funds from businesses, individuals and other associations. 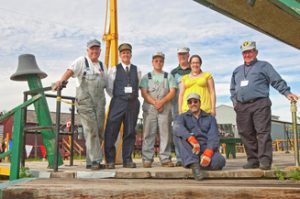 Recently, the Association celebrated its 50th Anniversary on July 14, 2018. The anniversary celebration would not be possible without the dedication and determination of the loyal volunteer base who have contributed countless hours in creating the success of the Museum. For 50 years, volunteers have not only preserved and restored artifacts but also provided an immersive display of Alberta’s railway heritage.

Thank you for all your support, the Museum would not be successful without you.