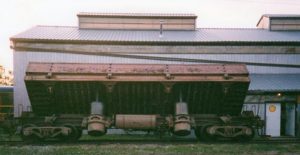 The ballast car traces its origins to the earliest form of hopper car, which was designed to reduce or eliminate the slow and back-breaking method of manually unloading a plain gondola-type car (a flat car with sides added). The earliest hopper cars used gravity to unload their contents. The next step was to control the placing of the material. Initially the bottom-unloading hopper car was used primarily as a mine product car, delivering coal, for example. Where the material could be dumped in a pit, this worked well, but when the cargo was dumped on the ground then hand labour was required to clear away the material from under the car.

When railways began to pay more attention to ballasting their roadbeds in order to accommodate faster and heavier trains, there was a need to distribute ballast on the sides of the track as well as between the rails. This was why the Hart-Otis Ballast Car was invented.

Ballast is the gravel or rock that is used to keep the railway ties in place. Ballast also supports the rails and provides for proper drainage of the roadbed so that ties do not rot or sink.

A Lidgerwood winch car and a plow were used to empty the cars. The winch car was coupled at one end of the ballast train and the plow was placed in the last car at the other end. Carrying the cable from the Lidgerwood to the car carrying the plow involved several steps.

One of the work cars had a boom attached to its roof. The ballast train was spotted on a siding, the locomotive picked up the boom car and, moving onto the parallel track, stopped next to the Lidgerwood where the cable was attached to the boom. The locomotive and the boom car now ran parallel to the ballast train and carried the cable to the plow in the ballast car at the end of the train.

The locomotive was returned to the end of the train, coupled up to the Lidgerwood, and provided the compressed air to operate the winch. The ends of the cars were lifted out, the winch pulled the plow through the cars and the ballast was dumped either down the center of the car between the rails or off on either side, along the rails.

More recently a crawler tractor (such as a Caterpillar D4) was used to unload the cars. It was loaded in the end car and, after the end panels were removed from the cars on the ballast train, the bulldozer would travel along the train, pushing the ballast out of the cars.

The ballast train was usually followed by a spreader and a tamper to pack the gravel. Before mechanized tamping was developed, crews of men would perform the function manually.