A Brief History of Alberta’s Railway

The first railway in Alberta was the Canadian Pacific Railway (CPR) which was built across the province through Medicine Hat, Calgary and Banff in 1882-83. Two years later a line was completed from near Medicine Hat to Lethbridge and then south to the United States in 1890 to connect with the U.S. railway system. Over the next 25 years the CPR completed a number of branch lines, somewhat more concentrated in southern Alberta than in the north.

The first railway built into Edmonton, before it was amalgamated with Strathcona, was the Edmonton, Yukon and Pacific (EY&P). It connected to the C&E in Strathcona, and went down the Mill Creek Ravine and across the Low Level Bridge into Edmonton in 1902. The EY&P became part of the Canadian Northern Railway (CNoR). The EY&P lettering is presently used on the steam train in Fort Edmonton Park.

The CNoR main line reached Edmonton from the coast in 1905 but did not reach the British Columbia border beyond Jasper until 1913. During this interval, the CNoR built a number of branch lines in the province, concentrating in central and north central Alberta.

In 1909 the Grand Trunk Pacific (GTP) main line reached Edmonton from the east and crossed the B.C. border west of Jasper in 1911. The GTP built relatively few branch lines. They built the Hotel Macdonald in downtown Edmonton in 1916.

In 1916 and 1919 the CNoR and GTP became components of the newly formed Canadian National Railways (CNR). Over the next few years several lines of the original two railways were consolidated, with the GTP lines generally surviving because they were built to a higher standard than the CNoR’s.

The Northern Alberta Railways (NAR) came into being in 1929 and was merged with the CNR in 1981. The NAR was an amalgamation of four railways, the Edmonton, Dunvegan and British Columbia (ED&BC). the Alberta and Great Waterways Railway (A&GW), the Canada Central Railway (CCR) and the Pembina Valley Railway (PVR). 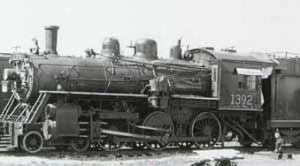 May 1969 marked the completion of North America’s newest railway, the Alberta Resources Railway (ARR), a 234 mile line between Hinton and Grande Prairie.The Alberta Government built the Alberta Resources Railway from near Hinton, through Grande Cache to Grande Prairie. Construction of the railway started early in 1966, and was authorized to carry traffic by the Railway Transport Committee on May 28, 1969. A few years later the CNR completed a line from near Peace River to Hay River, NWT.

Railways were built to serve the transportation needs of the settlers of the West. With the advent of better highways for motor vehicles over the past 20 years, railway companies have been steadily abandoning their branch railway lines. One such line, running north and south and east and west through Stettler, has gained a new lease on life as the Central Western Railway.