This combine was built by Canada Car & Foundry for the Canadian Northern Railway as Second Class Smoker 6755.  The car served on crack (high priority fast mover) passenger trains, riding behind the baggage car and in front of the coaches.

In 1965, 7379 became work service car 72782. In 1987 the exterior of the car and the smoking section were restored so that the car could be used in a movie “The Gunfighters”, part of which was also filmed at Fort Edmonton Park. In 1979 the car was painted as an Alberta & Great Waterways passenger car and used in the movie “Silence of the North”.

The combine has been refinished inside during the summer of 1995.The exterior was repainted in the summer of 1996. It was used in an episode of “Jake and the Kid” that was filmed on the property in July 1996. 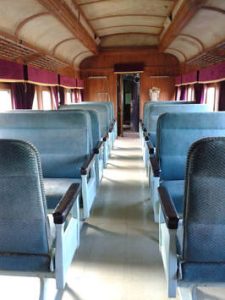 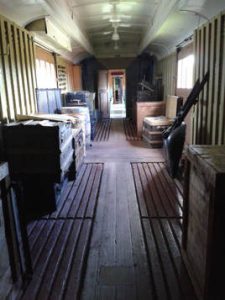 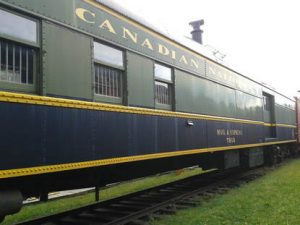 The mail express car was built by Canada Car & Foundry for the Canadian National Railways. It was last used for CN Ocean Limited between Montreal and Halifax. It was acquired by the National Museum of Science and Technology in 1972.

Most of the fittings are still in place. The tags in the postal section identify towns and cities along that line. The Express section contains a display interpreting the components and operation of steam engines. The rounded metal brackets on the outside of the mail doors held the now-removed catch bar that was swung down to catch the bag of mail that the station agent would have hung up on a catch-post. A catch-post is mounted on the west end of the St. Albert station platform. Mail for the town was tossed off the train onto the station platform by a mail clerk. 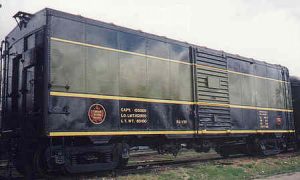 This baggage car was built by Canadian Car & Foundry as a box car. It was then converted to a box baggage car and fitted with high speed trucks. This car is an example of those that were used on passenger trains to carry baggage, express parcels and other time sensitive materials across Canada. During World War 2, these cars sometimes carried as many as 1,000 bags of mail for overseas. This car is currently being used for storage.

This baggage car was built by Canadian Car & Foundry. It was used on passenger trains between Toronto, Halifax and Vancouver. During the Second World War, baggage cars such as this one carried wing and tail assemblies for aircraft from manufacturing plants in Ontario to Halifax for overseas shipment. Baggage cars such as 8730 were also used on the silk trains in the ’20s and ’30s.

High priority shipments and Less than Carload Lots (LCL) were often sent in baggage cars on Through Passenger Trains. The cars could also be fitted with collapsible stalls to carry horses.

This baggage car was acquired by the Model Railroad Club at Canadian Forces Base, Cold Lake, Alberta in April 1973. It was donated to the Alberta Railway Museum by the Commanding Officer. It is currently being used for storage.

This car was built by Canadian Car & Foundry for the NAR for Edmonton – Grande Prairie – Dawson Creek service. It was also used on the Fort McMurray mixed train. In 1949, modifications were made to the car which included electric lighting and a generator. After amalgamation with CN in 1981, it was numbered 7855. It has since been restored and now contains CN Timeline panels from the Vancouver Expo 86. 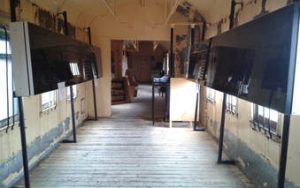 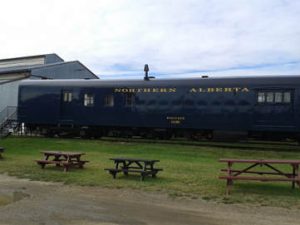 1460 was built by Canadian Car & Foundry for the NAR using CPR specifications for mail-express cars. It also served on the mixed train from Edmonton to Fort McMurray. In 1981 after amalgamation with CN, it was numbered 7856. The car has been repainted and renumbered back to 1460. It now contains an NAR historic interpretive display.

This sleeper car was built by the Pullman Car Company for the US Army Troop and numbered 9286. In 1947, it was purchased by the NAR for $6250, converted to passenger train service and numbered 1220. The car was then used to haul express cargo and baggage. Canadian National then used the car for cable storage and renumbered it to 61141. It was painted in 1997 supported by a grant from the Alberta Museums Association and the Inmate Work Program of Alberta Solicitor General. The car currently has diesel locomotive interpretive panels, engine demonstration parts and a partial locomotive control center on display. 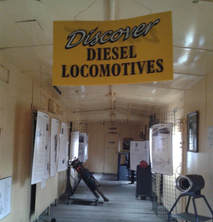 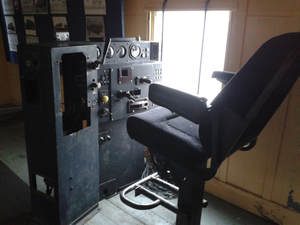 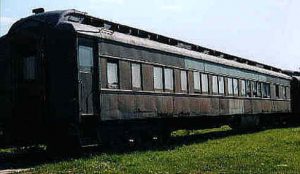 “WESTLOCK” was built by Pullman Car Company for the Baltimore and Ohio Railway as a 12 section / 1 drawing room sleeper. The car was given the name “NUGENT”. It first saw service hauling World War I passenger traffic in the United States.

This car was bought by the NAR in 1942 and renamed “WESTLOCK”. It was acquired to handle increased passenger traffic caused by the building of the Alaska Highway and the “CANOL” project in 1942. (CANOL was the term used for the refinery situated on the Mackenzie River at Norman Wells and the pipeline constructed to take oil from the refinery to the Yukon in response to the threat of a Japanese invasion on the west coast of Canada and the USA). The car was also used for troop transport to Waterways and Dawson Creek.

When the “WESTLOCK” was used by the NAR in passenger service between Edmonton and Peace River, it would leave Edmonton’s downtown CNR station at 5:30 p.m. and arrive in Peace River the next morning. For this trip, upper berths were $2.80 per night and lower berths $3.50 per night (1950 prices). The drawing room would set you back $11.00 for a single or $13.00 for a double. Originally called the “AVALON”, this car was built by the Barney & Smith Company as a 12 section/ bedroom sleeper for the Chicago, Milwaukee, St. Paul and Pacific Railroad.

In 1928, the Edmonton, Dunvegan, and British Columbia Railway (ED&BC) purchased the car. When the ED&BC became part of the NAR, the car’s name was kept briefly, but in 1929 the car was renamed “PEACE RIVER”. In 1947, it was converted to a Superintendent’s business car and renamed “DUNVEGAN”. The car was then renamed back to “PEACE RIVER” in 1964 and then to Business Car #3 in 1966. The car was then converted to and auxiliary sleeper car in 1968 and renumbered 17107.

In 1991, supported by grants from the Wildrose Antique Collectors and the Alberta Museums Association, the exterior of the car was completely restored. In 1992 the original brass railings were recovered and installed.

Dunvegan is currently in the Calder Shop being restored. 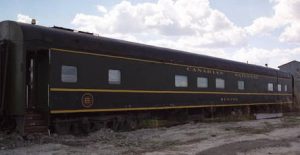 This car was built by Canadian Car & Foundry as a 12 section / 1 drawing room sleeper. It was numbered CN 1654 and called “Johnson” as it was one of the named cars on Canadian National Railways Confederation Train of 1927. These cars were named after the individuals who signed the Articles of Canadian Confederation. Locomotive 6015 – presently on display at Jasper – was one of the locomotives that pulled the train as part of the 60th anniversary of Confederation. The car was then converted to a 8 section / 4 drawing room in 1954 and became CN 2189 “PELEE ISLAND”. It was then transferred to work service in 1981 as Auxiliary Bunk Car 61177.

It has been repainted into the classic Super Continental color scheme and renamed back to “PELEE ISLAND”. It is currently being used for storage. “FORT BRABANT” was transferred to work service as CN 59714 in 1982. Major modifications were done to the interior. These included windows being changed, end windows sealed and the sleeping accommodation removed. A full kitchen was then installed, dining seating put in and a lounge area was constructed.

“RYCROFT” was built by the Pullman Car Company for the Canadian Pacific Railway as “KEMPTON”, part of an order for thirteen 12 section / l drawing room sleepers. This series of cars was named after towns in Canada whose names begin with “K”. It was used for troop transport to Waterways and Dawson Creek. In 1945, NAR bought the car and renamed “RYCROFT” after the town of Rycroft, Alberta.
In 1967, the car was converted to work service as a shower, laundry and recreation car. It was numbered 18102

In 1988, the car was refurbished for use as a museum’s office. Restoration to the day coach was started but never completed. A pictorial display of railway history and memorabilia has been set up in the car as repairs continue. The car is currently under a protective white tarp awaiting more restoration. This high speed refrigerator car was built in 1947 by Marine Industries. It was developed to operate on the head end of passenger trains. The car demonstrated the evolution from ice to mechanical refrigeration. Cars such as this transported fresh fish, meat, and other perishables. This car is currently being used for storage.

This comboose was built by Jackson and Sharpe of Wilmington, Delaware for the Boston and Albany Railroad as a day coach. It was numbered 632. In 1929, it was acquired by the ED&BC and numbered 1859. In 1949, it was converted to passenger coach / crew caboose and became a comboose. It was numbered 306. At the end of the passenger service in 1969, it went into work train service. In 1985, after amalgamation with CNR, it was renumbered to 78968. This car is now being restored in the Dunvegan Shop. (Picture taken in 1981 in downtown Edmonton). The car was built by Barney & Smith in Dayton, Ohio. The Alberta & Great Waterways Railway purchased it from the railway car dealer Hotchkiss Blue Co. of Chicago, Illinois in 1917 as Combine Car 12. The car went into service and was renumbered 1650. It retained this number after amalgamation with the NAR. The car was then converted to work equipment as an auxiliary tool combine car and renumbered to 17106.

1650 is the only remaining passenger car from the Alberta and Great Waterways Railway. It is currently in the Dunvegan Shop being restored. This car was built by Preston Car Company for the Canadian Government Railway as the sleeper “VILLE MARIE”, a 10 section / 2 drawing room car. It was used on the ‘Ocean Limited’ and the ‘Maritime Express’ passenger trains in eastern Canada. In 1920, it became a CNR sleeper car. It retained its name and was numbered 1520. In 1943, it was converted to a colonist car and renumbered to 2928.

For more information about this car, see Rule Instruction Cars.