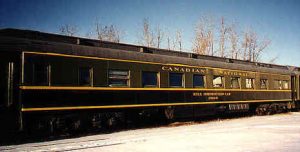 In 1956 “VILLE MARIE” was made into a Rule Instruction Car – a mobile classroom for railway employees. One end of the car served as the living quarters for the instructor who traveled with the car from point to point along the railway. The car contained the instructor’s living room and kitchen along with a bedroom complete with nickel plated sink and stainless steel shower. Usually there was only one instructor per car, but an extra bed was added for the rare times that two instructors were needed.

Rule Instruction Car # 15029 was sent to various stations in Western Canada, and railway employees would gather in the classroom section of the car to be taught and tested in their knowledge of the rule book and various aspects of railway operation. The car originally had desks and chairs with a much larger desk for the instructor and a blackboard on the wall behind the desk. The desks were removed in the mid 1960s and replaced with the current seats. Rule Instruction Car # 15029 served until 1974, so quite a few of the railway employees still working for CN were taught in this car. The carpet in the hallway and instructor’s bedroom carries the black and white CN logo.

Donated by CN in 1979 and funded by a grant from the Alberta Museums Association and supported by the Inmate Work Program of Alberta Solicitor General, the Rule Instruction car was repainted in 1997.