‘Twas the day before Christmas

Home‘Twas the day before Christmas
Stephen Yakimets
Uncategorized
‘Twas the day before Christmas, when all through the Museum
Barely a creature was stirring, just two cats.
The tools were hung in the crib with care
In hopes that railway Santa would soon be there.
The trains were nestled all snug in the shop
While visions of operations danced in their heads.
And 1392 in scaffolding, and flanger apart,
Awaiting repairs over a long winter’s season.
When out on from the wood shop arose such a clatter
I sprang to the door to see what was the matter.
Just Barry and Phil making wood with the router
And Jamie assembling a train out of cedar.
The diesel boys stayed away due to the new-fallen snow
But Monica appeared, taking some photos.
When, what to our wondering eyes should appear,
But a coach, pulled by engine # 73.

The engineer sprang to the cab, and gave two toots on the whistle,
And away they all steamed like snow geese in a blizzard.
But I heard him holler, before he swooshed out of sight,
HAPPY CHRISTMAS TO ALL, AND BEST WISHES FOR 2018! 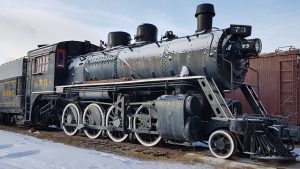