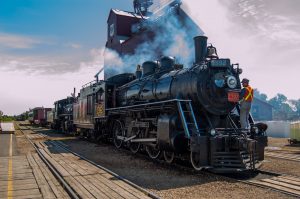 Today was a glorious day for double-headed steam action. 1392 is performing brilliantly and gets better all the time; the crew are all very proud of her and how she’s doing. Not bad for a girl that was built ten years after man’s first powered flight by the Wright brothers in 1903. She was in service when the Empire entered the Great War in 1914 and had already been in service for 26 years when Canada declared war in 1939!

The train departed Stettler following a static display of the locomotives while crews readied them for departure. It was a great chance for members of the public to ask questions about the locomotives and their histories. At 1600 when the train left, my two-year-old daughter got into the action puffing and making whistle noises. There really is something for everyone here. For example the Stettler P & H grain elevator museum next the station is outstanding in its own right. It is fascinating to see how a grain elevator works, and the volunteers are some of the finest people you will meet. They will try to drown you in coffee and stuff you with homemade cookies.